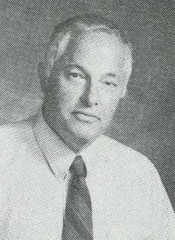 At Madison West High School Al participated in football, hockey, volleyball, and archery. In 1946 he was City of Madison’s "Outstanding Sophomore" in football. In 1968 he was co-captain of the football team, All City, All Big R, and All-State first team. He was also senior class president. He was a starting guard on offense and defense for the South All-Star Team.

In 1949 Al was a starting guard on the University of Wisconsin Freshmen Football Team before an injured knee ended his career.

In 1964 he wrote an article for the WIAA Coaches Association Quarterly titled "Player Evaluation and Mental Toughness." Also in 1964 he was a speaker at the University of Wisconsin-Madison Coaches Clinic.

In 1972 Al was the line coach for the Championship West Allis Spartans Semi-Pro team.

Al has received the Wisconsin Athletic Directors Associations' 25 Year Award and has been nominated for Greenfield's Outstanding Citizen Award.