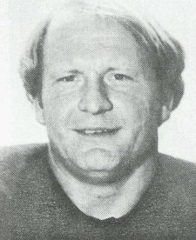 Professional Football Player with the Pittsburgh Steelers since 1974.

At Rhinelander Mike participated in football, wrestling, and track. He was selected to the All-State Football Team in 1969.

At the University of Wisconsin he was a three year starter at center, senior MVP, tri-captain, and All-Big 10. He played against the Steelers in the College All-Star game. He also participated in East-West, Hula and Senior Bowls and Coaches All-American game.

Mike was the Pro football's top center and Pro Bowl starter for several years. He never missed a career game, playing 180 straight dating back to 1974. He was a starter in every game from 1977 - 1985. He built a string of 140 consecutive starts including post season dating back to 1976. For six seasons has earned lion's share of post season All-Pro honors including AP, Pro Football Weekly, Sports Illustrated, Sporting News, Pro Football Writers and N.E.A. He was a courageous player who played his last four games of 1980 with torn knee cartilage, which required surgery after the season. In 1974 he won All-Rookie honors by Pro Football Writers and Pro Football Weekly. Teammates say he is the strongest player on the team. He began as a 225-pound rookie and used the club's weight program to build to current 255-pound playing weight. He won the NFL Strongman competition following the 1979 season.

Inducted to Pro Football Hall of Fame in 1997.

Mike was honored by the Wisconsin High School Football Coaches Association, because of his contributions to the game of football.