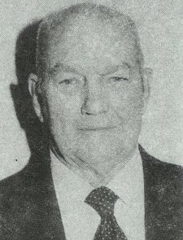 John served in the United States Marine Corps during World War II and was called back to duty during the Korean War.

In his first coaching role John assisted at St. Norbert High School in 1947 where he served under the late Fred Dillon. He started teaching and coaching at Independence in 1949 where he started the football program. He also coached basketball and baseball at Independence.

At Denmark where he taught physics and biology John directed the Vikings to several Little Nine football championships, including an unbeaten season in 1952. His other coaching duties at Denmark included basketball, baseball, and track.

John gave up his coaching career at Denmark in 1961 in order to serve at St. Norbert under Howard "Chick" Kolstad as the defensive coordinator.

Being very humble about his accomplishments John's reasons for staying in coaching so long are very simple. "I just like football and the kids," Hickey said.