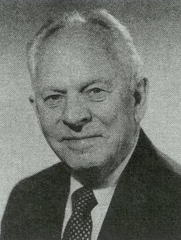 Milwaukee Lincoln High School 1929-30, and
UW-Milwaukee 1931-55 - six conference championships.
Herman attended Riverside High School and excelled in football and track. He earned All-City honors in football as a guard and captained the track team. He went on to star at Milwaukee Normal School, later to be named Milwaukee State Teachers' College and currently the University of Wisconsin-Milwaukee. Herman was named All-Conference in football as a guard and tackle for two years and captained the track team for three years.

Upon his graduation in 1928, he took a teaching job at Cudahy High School for one year and then coached football and taught at Milwaukee Lincoln High School from 1929 to 1930. In 1931, he was named a physical education instructor and head coach of football and swimming at his alma mater, then called Milwaukee State Teachers' College.

During his 25 years as football coach, he took his team to six state championships. As swimming coach for 38 years, he compiled a 145-80-1 dual meet record and was largely responsible for developing the state conference swimming program for colleges. Herm became Athletic Director in 1937 and was also named as Chairman of the Physical Education Department, holding both positions until 1969.