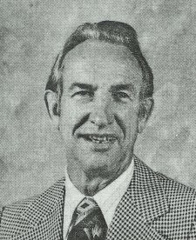 Guy has served as Commissioner of the Mid-Eastern Conference and Fox Valley Association for 37 years. He was athletic director at Kaukauna for 33 years. He spent two years as President of the State Commissioners' Association. He is in the Kaukauna High School and UW-Stevens Point Hall of Fame. He has received two sports awards at the Red Smith Banquet. Was named one of four outstanding contributors in the field of athletics in 100 years of Kaukauna history. Received the Kaukauna Alumni Association Award.