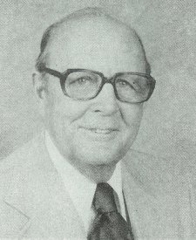 Virgil graduated from Baraboo High School where he excelled in football, basketball and baseball. At the University of Minnesota he gained All-Big Ten honors in basketball and in 1933 he was an All-American.

He began his coaching career at Randolph in the fall of 1933. In 1936 he moved to Oconomowoc where he coached football for 25 years. He left football after the 1961 season. He also coached basketball for 17 years winning three championships.

In 10 years as golf coach his teams won 5 championships.

Virgil served as athletic director at Oconomowoc for 30 years and in 1977 was selected as Wisconsin's Athletic Director of the Year. He was a member of Phi Delta Theta, Phi Delta Kappa, University of Minnesota Alumni Association and the Oconomowoc Kiwanis Club.