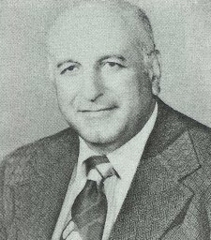 Luther L. Wright High School 1949-53; and
University of Wisconsin-Superior 1954-85.
Mertz graduated from Luther L. Wright High School in Ironwood, Michigan, where he lettered four years each in football, basketball and track. He held the state record in the 880 for 40 years. At the University of Wisconsin-Superior he was one of the all-time great athletes, excelling in football, basketball and boxing. He was an all-conference performer in football for two years. He was the first athlete to sign a modern NFL contract with the New York Giants in 1948.

In over 30 years at UW-Superior Mertz has established the true meaning of loyalty and dedication. He brought Superior from a two-sport university to 11 in 1954 by raising all the money from the outside. As a coach, Mertz was involved with 109 seasons, including 39 in football, 27 in wrestling, 18 in track, 17 in basketball, 5 in baseball and two each in gymnastics, golf and tennis. The overall record of this man at all levels of competition stands at 823 wins, 538 losses and 24 ties.

In the sport of wrestling he has over 200 wins with five conference championships, four NAIA District Championships. His wrestling teams placed in the top 10 nationally five times.

He is a member of the NAIA District Coaches, State of Wisconsin, Northern Michigan, District 14, UW-Superior, City of Superior and Duluth Hall of Fames.

The contributions and achievements made by Mertz toward State and National sports will live forever.