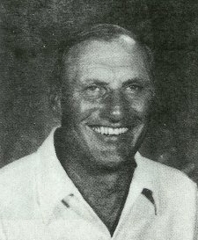 His record was 150 Wins, 96 Losses, 6 Ties, seven conference championships and one undefeated season.

Bill graduated from Milwaukee Washington High School in 1943 where he played football under Lisle Blackbourn.

After serving in the military he enrolled at UW-La Crosse. At La Crosse Bill excelled in football, basketball and track. He was a member of the 1951 Cigar Bowl Team.

His entire coaching career was at South Milwaukee where he coached football for 30 years. He also assisted in track for fourteen years and wrestling one year. In 1976 he qualified a team for the first W.I.A.A. football play-offs. He coached the 1982 South All-Star football team to a victory over the North squad in the Shrine Game.