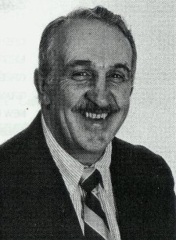 Oconto Falls 1958-59;
Beloit Catholic 1959-67; and
Janesville Parker High School 1967-81.
In high school Don was an all-around athlete. He excelled in football, basketball, and tennis. In college as a football player he was captain of the team as well as earning AII-Conference and All-American honors. He was also a member of the tennis team.

In twenty-five years of football coaching Don compiled a record of 106 wins, 94 losses and 3 ties. His football teams won three conference championships. As a basketball coach he led his team to three conference championships. His baseball teams won two and the track teams earned one. He also coached girls basketball and softball.

In 1967 he received the Big Eight Coach of the Year "Award. He has been honored in Who's Who in America and received the NCAA Honorary Award Medal of Merit.

He was involved with the committees that formulated our present Football Coaches Association, restored the All-Star Game, and established our Football Play-Offs.

Don says "It has been my feeling that the greatest reward of coaching is seeing the athletes succeed in their various endeavors of life. It is especially gratifying when they find time to come back to say "Hi." I thank the Lord for allowing me to be a football coach."