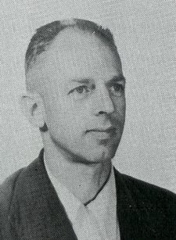 Cy was an outstanding high school athlete. He starred in baseball, was All-Conference in basketball for three years and won three WIAA State Tennis Championships. He played football, basketball and baseball at the University of Wisconsin - Madison. In baseball he earned three major letters.

As a professional baseball player he was a member of the Montreal Royals Little World Championship team in 1946 and the Milwaukee Brewers Championship team in 1947. In 1948 he was a member of the American Association pennant winning Milwaukee Brewers. He pitched for Leo Durocher and the Brooklyn Dodgers and beat the Cubs three times the year the Cubs won the pennant.

He is a member of the American Bowling Congress' 700 Club.

Cy coached football for 19 years. As a head coach his record was 87 wins, 39 losses and 6 ties. His teams won five championships and were undefeated three times. His baseball teams compiled a 260-85 won, loss record with 11 championships. As a basketball coach Cy won 154 games and three championships. In Volleyball his teams made six trips to the State Tournament. In 19 years of coaching Cy’s teams won 26 conference championships.