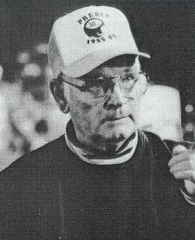 After high school Bill coached football for six years at the Parochial Grade School level compiling a 48-1-1 record. He was in the military service from 1942 to 1945.

From 1946 through 1950 Bill was an assistant coach at Green Bay Central Catholic High School (Premontre). In 1951 Bill accepted the head football position at Kewaunee High School where he compiled a 19-7-2 record with one championship. In those years he recorded 154 wins, 98 losses,' 4 ties and six championships. In 41 years of coaching football Bill's teams won 249 games.

He was Athletic Director at Kewaunee and Preble for a total of 27 years. He coached basketball for twelve years with four championships and a record of 156 wins and 95 losses.

In 1985 Bill was the head coach of the North squad in the Shrine All-Star Game.