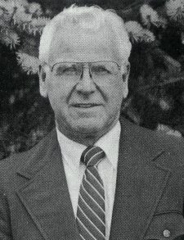 After the war he attended St. Norbert College where he earned letters in football, basketball and track. In his senior year Bill was co-captain of the football team.

After college he coached basketball and baseball at Hilbert for three years. He moved to St. Johns where he coached for fifteen years. His football teams won 7 championships. From 1968 through 1984 Bill coached football at Little Chute High School where 9 more championships were won. His overall football record is 187 wins, 66 losses, 8 ties and 16 conference championships.

Bill was the Athletic Director at Little Chute for 20 years and he coached boys and girls track for 8 years.

In 1973 Bill won the Little Chute "Red Smith" Athletic Award as well as the Little Chute Jaycee "Man of the Year" award. The village of Little Chute honored Bill with a proclamation as "Bill Fitzpatrick Day" in 1976. He received the St. Norbert College Alumni Award in 1979.

In 1947 Bill married Margaret Jacobs, who together brought into the world and raised eight children. Twin sons were born two hours before coaching his first football game.