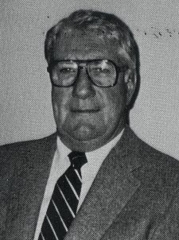 Ray played football at Ashland High School, University of Wisconsin - Milwaukee and for the Navy while in the military service.

In 1953 he started his coaching career at Wisconsin High School in Madison. In 1954 he moved to Augusta where he coached for five years. In 1960 Ray Hendrickson started coaching in Milwaukee where he stayed until retirement in 1984. His teams won four City Championships. The 1984 team went undefeated and qualified for the State Play-Offs. In his fifteen years as head coach in Milwaukee schools Ray had a record of 81 wins, 48 losses and five ties for a .628 winning percentage.