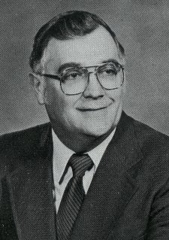 Albia, Iowa 1955-56;
Colo, Iowa 195657;
Winneconne 1957-59; and
Waupun High School 1959-74.
Louis was a star athlete at Waupun High School where he lettered in football, basketball and baseball. Lakeland College selected him the top all-around athlete during the college's first 50 years (1934-85) of intercollegiate athletics. At Lakeland Louis played football, basketball and baseball. For three years he led the football and basketball teams in scoring. His 12 touchdown receptions are still a school record.

He is a member of Lakeland's Hall of Fame.

As a football coach at Waupun his teams won four championships while compiling a 62-45-2 record. In his twenty years of coaching he also coached basketball and track.

Louis is a member of the VFW, Rotary Club, Masons, and Shriners (Madison Zor Temple).