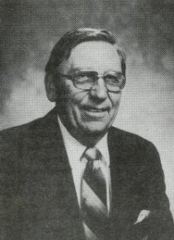 John graduated from Iron Mountain High School where he lettered in football and basketball. He was All-Upper Peninsula in football. In football he was named all-conference and Little All-American in 1938. In 1939 John played guard for the NFL champion Green Bay Packers. In 1940-41 he teamed with Johnny Blood to play with and coach the Kenosha Cardinals in the American Football Conference.

He served in the U.S. Navy Air Corps from 1941 to 1945. During World War II he played football with the Iowa Pre-Flight Navy team coached by Bernie Bierman before going overseas.

After the war, he coached basketball and was an assistant in football at St. Norbert College. In 1952 John started teaching and coaching at Green Bay West High School. In 1960 John's team was rated number one in the state. He was selected Coach of the Year three times.

He became principal at Green Bay West in 1960.

In 1972 he was selected to the WIAA Advisory Council. He was chairman of this committee when they established the football play-offs. John is active in the American Legion, Past President of his church council, and Past President of the Green Bay Packer Alumni. He is a charter member of the Lake Forest College Hall of Fame and the Green Bay Packer Alumni.