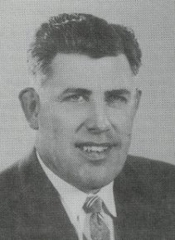 Milt graduated from high school in Mound, Minnesota where he played football, basketball, baseball and track. At the University of Minnesota Milt was a member of two unbeaten football teams in 1934 and 1935. They were National Champions in 1935. He was a player on two Big Ten championship baseball teams, serving as captain in 1935. Also in 1935 Milt signed a contract to play baseball for the St. Louis Cardinals.

As a coach at Amherst College Milt's football teams won two championships. At Lafayette he won one championship in a two year tenure. Milt ranks as the only Wisconsin football coach as of 1988 to guide Badgers to two Big Ten football titles. Under Bruhn the Badgers have attained undisputed Big Ten titles in 1959 and 1962. Their No.2 rating in the final 1962 national football polls was the highest any Wisconsin gridiron team has ever attained. Milt coached the Badgers when they represented Wisconsin in the Rose Bowl in 1960 and 1963.

He coached in three East-West Shrine games in San Francisco, the Optimist Bowl at Tempe, Arizona, in the American Coaches Association Bowl Game, and the Blue-Gray Game in Montgomery, Alabama.

Milt was voted "Coach of the Year" in 1962 by the Pigskin Football Club of Washington, D.C. He won the "Regional Coach of the Year Award" of the American Coaches Association in 1963.

He is a trustee of the American Football Coaches Association where he has received the 35-year life membership award. Milt is also a member of the Madison Hall of Fame.