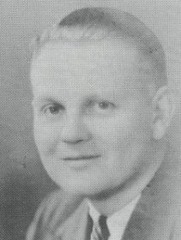 Arnold graduated from Stoughton High School in 1919 where he starred in football. At Carroll College he played fullback for four seasons and earned all-state honors twice.

His first coaching position was at Lake Mills High School where his teams compiled an 18-9-1 record in football. He also coached basketball and baseball.

Arnold moved to Watertown in 1929 where his football teams in a span of 23 years won 112 football games and 8 championships. In addition to coaching football at Watertown High School he was a highly successful basketball coach with his 1939 team winning the WIAA Class B Championship. During his tenure at Watertown he was a teacher of Physical Education, Coordinator of an extensive Intramural Program, and Athletic Director.

In 1947 he was an assistant coach on the South All-Star Team. The South won the game.

In recognition of Arnold’s faithful service as a teacher and coach and as a tribute to his exemplary leadership in the development of character and sportsmanship the athletic field at the site of the Watertown Riverside Junior High School was named "The Arnold Landsverk Athletic Field" in his honor on October 27, 1968.