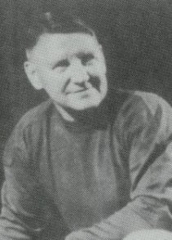 Carl graduated from high school in Butte, Montana where he was an all-state football player. He was also a state wrestling champion. At Beloit College he was team captain and all-conference in football as a senior.

His first coaching position was at Geneva High School Illinois. At Geneva he compiled a 95-52-15 football record. Carl went to Beloit High School in 1945. In five years at Beloit his football teams won 31 games and two championships.

In 1947, his only year as basketball coach at Beloit High School, his team won the WIAA State Championship. He was honored by being selected Coach of the Year.

While at Beloit Carl also introduced wrestling to the program and was a pioneer in developing that sport in Southern Wisconsin. His wrestling team won the conference championship in 1950 and finished third in the state in 1949 and 1950.

In 1950 Carl moved on to Beloit College where he coached for 12 years. His 1952 team was undefeated the only time in the school's history.

He ended his career at Milton College where his teams won two championships in three years.

Carl was a charter member of the National Committee for Track and Field for the National Association of Intercollegiate Athletics, State Chairman of Football for District 14 of the N.A.I.A. in 1956-57. He was one of a five member Quaker Oats National High School Coaches Board in 1948. He was one of the organizers of the Beloit Boys Club "Pop Warner" football committee.