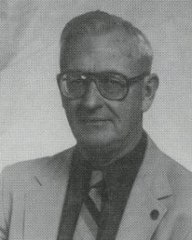 Jim graduated from Madison East High School in 1943, where he earned honors in football, basketball and track.

He entered the military service in 1943 and served two years in the Philippines.

At the University of Wisconsin, Jim excelled in football and baseball. He was the team captain in baseball his senior year. After college, Jim played professional baseball with Superior in the Northern League and Colorado Springs in the Western League. He later played semi-pro baseball with Merrill and Winona. He played football for the Wausau Muskies in the Central States League for three years.

As a football coach at Racine Park, Jim was named Big Eight "Coach of the Year" in 1958 and 1960. He also coached basketball, baseball and track. At Birnamwood his 1952-53 basketball team earned a trip to the state tournament. His 1956 Watertown baseball team won the State Championship.

He played a major role in conference realignment in the Southeastern Wisconsin area. He has been a positive force behind high school athletics for many years.