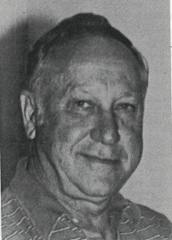 LeRoy graduated from Wilmot High School where he was a standout athlete in football, basketball and baseball. He went on to a fine football career under famed coach Dana X. Bible at the University of Texas. He teamed with Bobby Lane to form one of the top passing combinations in the Southwest Conference and, in 1945, helped the Longhorns score a 42-27 victory over Missouri in the Cotton Bowl.

Andy began his coaching career at Wilmot in 1946, compiling a 5-0-1 record and winning the Southwestern Conference title. He then moved to Sheboygan Falls where his teams compiled a record of 13-2-2, including two league titles. From 1955 until 1960 he coached at Kohler, directing his charges to an outstanding record of 35-3-2 with three Eastern Wisconsin Conference crowns.

He concluded his 24 years in coaching at Stevens Point where he compiled an overall record of 21 wins, 32 losses and two ties. He also coached basketball and had a record of 54 wins and ten losses at Kohler. His 1956 team finished 4th in the WIAA State Tournament.