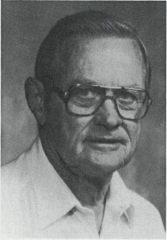 He served for three and a half years in the Naval Air Corps during World War II. In 1973

Gene was presented with the Red Smith Athletic Award and the Elks Club leadership Award. During his 36 year coaching career Gene has also coached basketball, baseball and track. He was named Fox Valley Coach of the Year four times and Metro Coach of the Year three times. He was enshrined into the lakeshore Hall of Fame in 1983.

He was an Assistant Coach of the North All-Star team in the 1981 Shrine Game.

He was a member of the original WIAA Committee to establish football play-offs in the state. In 1982 Gene received the Wisconsin C.A.S.E. Award for his work with exceptional children. In 1986 he received the District High School Teacher of the Year Award.

In 1969 his team at Green Bay East was the runner-up for the mythical State Championship. In 1978 they were in the state play-offs.

After the 1983 season, Gene retired from high school coaching. After retirement, he was an Assistant Coach at St. Norbert College.

In 1949 Gene married Fay Manske. They have six children and one foster child.