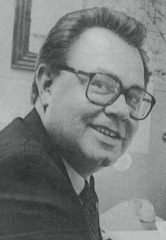 LEADERSHIP and DEDICATION are the two words colleagues and former players most often mention when asked to describe Cal. "By his own example and leadership, he convinced us we were winners - and we won," states a former OHS captain. Whatever the task, Cal has consistently provided the dedication necessary to inspire football players and colleagues to do their best.

As a student-athlete at Hayward High School Cal earned eleven varsity letters while competing in football, basketball, baseball and track. As a senior Cal was named to the All-State football team. Cal lettered in football as a freshman at St. Thomas University and in 1960-62 started as fullback at UW-Superior. He was named WSU All Conference fullback in 1961 and received honorable mention in 1962.

Cal was Head Football Coach at Oregon from 1965-83 and in those 18 years the football team won an impressive 78% of their conference games. From 1969 until 1976 Oregon's Panthers won conference championships seven out of eight years. In 1977, Oregon became a member of the Badger Conference. Oregon proceeded to win three more conference championships before Cal retired from coaching after the 1982 season. His 1978 team finished second in the WIAA State Play-offs and the 1980 team placed fourth.

Cal has been a leader in his coaching profession and in his community. Cal was a member of the founding committee of the Wisconsin High School Football Coaches Association. He served that organization from its beginning in 1975 as secretary-treasurer and, later, as executive secretary until 1989. Cal was named to the South coaching staff in the first modern North South Shrine All Star Game in 1977. Cal has served on the organizing committee for the Annual Wisconsin High School Football Clinic since it originated in 1977. The WHSFCA Clinic has grown to be recognized as one of the finest in the Midwest.

He served on the advisory committee to the WIAA that established the present play-off procedure and played a key role in bringing representatives from the University of Wisconsin and the WIAA together to approve Camp Randall as the site of the state championship football games.

In addition to coaching Cal has served the youth of the Oregon community by organizing the summer recreation program in 1966, the Oregon Athletic Booster Club in 1975, and the Oregon Youth Football Program in 1979.

Cal was a charter member of the Oregon-Brooklyn Jaycees and is presently a member of the Oregon Optimist Club. While beginning his employment with the Oregon School District as a coach and biology teacher in 1965, Cal has been the Assistant Principal and Director of Transportation since 1968.

On July 1, 1989 Cal Callaway will assume the duties of Principal at Oregon Senior High School.