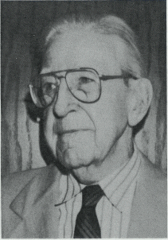 He began his coaching career at Shawano High School where he taught and coached for one year. His basketball team at Shawano won the State Consolation Basketball Championship. He then moved to the University of Wisconsin-Oshkosh where he coached for 45 years. From 1931 to 1956 Bob coached all the sports (seven). He also ran the intramural program.

His football teams won championships in 1923, 1924, 1928 and 1935. He coached basketball for 34 years and his team’s won the league crown seven times. His 1924 baseball team won the championship. He coached track for 32 years and in a 27-year span his tennis teams won 20 championships. Bob also found time to coach golf for 31 years. He coached Cross Country for 15 years.

Bob was inducted into the NAIA Hall of Fame and the UW-Oshkosh Hall of Fame. He also received the Outstanding Achievement Award from the University of Wisconsin-Oshkosh.

Bob's son Bob, Jr. was an All-American basketball player at the University of Southern California.

Bob is a member of the American Legion, Elks Club, NAIA, National "0" Club and the Titans Booster Club. He was a Navy veteran of two World Wars. During World War I he served in the European Theatre and in World War" in the South Pacific.

Bob retired as a full professor at UW-Oshkosh in 1967.