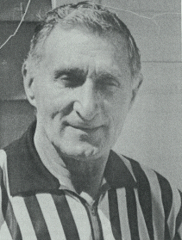 Ted graduated from Madison Central High School in 1940. At Central he was an All-City Guard in 1938 and All-City at Halfback in 1939. He also led Central to two basketball championships in 1939 and 1940. In 1940 Central won the Consolation Championship of the WIAA State Basketball Tournament.

His college career was interrupted by Army service during World War II. He served 17 months in the European theatre and returned to Ripon College in January of 1946 with a Purple Heart as well as Bronze and Silver Stars.

At Ripon Ted was a standout in track, he was named to All-Midwest Conference Teams three times in football and basketball and was a Little All-American football player in 1941 and 1946. He was drafted by the Green Bay Packers but decided to play with the Chicago Rockets of the All-America Conference. He also played professional basketball with the Oshkosh All-Stars and paced them to the Consolation Victory of the World Professional Basketball Tournament in Chicago in 1948. Ted also played football for the Wausau Muskies of the old Central States League.

In 1958 his Mosinee football team won the Lumberjack Conference Championship. Ted and his partner Bob Luchsinger for 23 years officiated nearly 1,000 basketball games throughout Southern Wisconsin, including four appearances in the WIAA State Tournament.

Ted was presented the Jack Dempsey Trophy awarded annually to Ripon's outstanding athlete, for the 1946-47 school year and inducted into that school's Athletic Hall of Fame in 1982. In 1983 he was enshrined into the Madison Sports Hall of Fame.