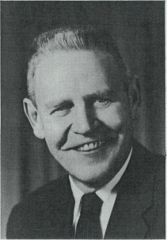 Smitty started teaching and coaching at Prairie du Chien in 1930. He coached football, basketball and baseball. In that same year he started the city's summer recreation program.

In 1942 he entered the Army and served in the South Pacific with the Amphibian Engineers. He came out of the war a Major and retired as a Lieutenant Colonel. He returned to Prairie du Chien in 1946.

He resumed all his coaching duties until 1954 when physical illness forced coaching retirement. He returned to the coaching ranks in 1960 to start an interscholastic cross-country program. He retired from coaching and teaching in 1973 after 43 faithful years of service.

Smitty's basketball teams won championships and in track his teams didn't lose a dual meet over an eight-year period. His 1937 track team finished 3rd in the state track meet and the 1938 team finished fourth. Smitty was an Assistant Coach on the South All Star football team with Ken Kitelinger under the old format. The athletic field in Prairie du Chien was named the Cecil F. Smith Athletic Field.

He is a member of the Blackhawk Booster Club, Eagles, VFW, American Legion and the Masonic Order in LaCrosse and Madison.