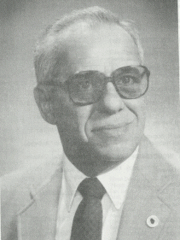 Frank graduated from St. Ambrose where he played football, basketball and ran track.

While in college, Frank participated in football and basketball. After college he took a job at Birchwood where he taught and coached for three years. While at Birchwood he coached basketball and started a wrestling program. In 1962 he moved on to Weyerhauser where his football team won a Championship in 1962. At Weyerhauser he started a wrestling program and coached the sport for three years.

In 1965 Frank accepted a job at Winneconne High School where he taught and coached for 23 years. During that time his football teams won a Championship in 1985 and were Sectional play-off finalists in 1985 and 1987. He also started and coached wrestling for 11 years. He also found time to officiate wrestling for 20 years.

Frank is a recipient of the WHSFCA Conference Championship Award and their Service Award. He received a 20 Year Award from the Wisconsin Wrestling Coaches Association and the "W" Certificate of Merit from the Federation of Wisconsin High School Coaches Association. In 1988, he was recognized by the Department of Public Instruction for 30 years of service. He is a Charter Member, past President, and Zone Chairman of the Butte Des Morts Lion's Club, a member of the American Legion, President of the Winneconne Kiwanis Club, and member of the Oshkosh-United Commercial Travelers