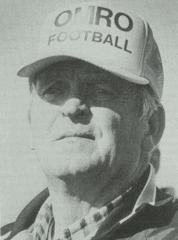 His record was 133 wins, 78 losses, 8 ties, three Conference Championships, and one undefeated season.

Ed graduated from Sturgeon Bay High School in 1947 where he lettered in football, basketball and baseball. After high school he served as a Merchant Seaman for two seasons.

He was a U.S. Marine for four years during the Korean War. Ed played football for the Quantico and EI Toro Marines and after being discharged he played for the semi-pro Wausau Muskies.

In 1977 Ed returned to Omro where he coached football and track for nine years. He has served as that school's Principal since 1978. He was Athletic Director at Kickapoo and Omro for nine years and has served as a member of the WIAA Sports Advisory Board. He was Class C District Representative during the formative years of WHSFCA and served as Chairman for the WHSFCA Hall of Fame for ten years and Scholarship Committee for six years. He also served as District Representative of the Coaches Federation. He was a recipient of the WHSFCA Twenty-Five Year Service Award and the One-Hundred Victories Award. He was District Coach of the Year in 1981.

In 1986 Ed was Head Coach of the victorious South squad in the Shrine Game. Ed was President of the local Kiwanis Club for two years and served as Lt. Governor in 1988-89. He is a member of the American Legion and lifetime member of the Marine Corps League. Ed believes that coaching football is the next best thing to playing it and his real satisfaction came in helping young people achieve their potential in athletics and in life.