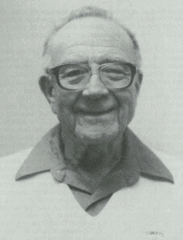 His sixteen-year record was 73 wins, 44 losses and 3 ties, and ten Conference Championships.

LeRoy graduated from Milwaukee Riverside High School where he lettered in football. At Ripon College he played football, baseball and ran track.

LeRoy was a member of the Waupaca Lion's Club; on the Red Cross Chapter Board of Directors for 43 years, Water Safety Chairman for 28 years, President of the Park and Recreation Board for five years, City Memorial Service Master Of Ceremonies 20 years, member of the JCC's five years, Election Clerk seven years, and Community Chest Chairman two years.

He taught Sunday School for five years, on the Church Council for six years, and President of the Men's Club. In 1974 LeRoy received the JCC's Distinguished Service Award. In 1984 he was selected the VFW Veteran of the Year. In 1987 he was the Waupaca Chamber of Commerce Person of the Year.