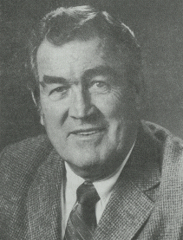 In 1956 he was named the Executive Director of the WIAA - a position he held for 29 years. As Director he was responsible for directing and managing the Interscholastic Athletic Programs for the 424 member high schools and 400 junior high schools involving approximately 85,000 boys and girls and a 2.3 million dollar budget.

John was inducted into the UW-Stevens Point Athletic Hall of Fame in 1975, Wisconsin High School Wrestling Hall of Fame in 1978. He received the National Federation Award of Merit for outstanding service to Interscholastic Athletics at the State and National level in 1985, National Federation Citation for outstanding contributions to high school athletics in 1981, Scholastic Wrestling Man of the Year in 1974, and the Stevens Point Distinguished Citizen Award in 1975.