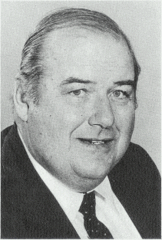 Henry has been more than a friend to high school football. He has been a Big Brother! For 40 years he has been taping thousands of ankles, legs and wrists. He has made doctors appointments, provided braces, pads and everything else that the athletes might need. Henry learned the art of "taping" from his father, who was the team physician of the Green Bay Packers and from Bud Jorgenson, the former Packer trainer.

He took his talent to Green Bay West High School in 1952 and has been the unofficial team trainer ever since. He spends approximately 20 hours a week during the school year. He goes to every event, home and away, for football, basketball and track. In recent years he has also helped with the girls' programs.

Henry is an area scout for the University of Nebraska and has helped athletes like Jerry Tagge, Dave Mason, Jim Anderson and other achieve successful college careers.

He is the owner of Military Golfland, an operation that employs many young athletes every year, giving them an opportunity to finance their college education.

Henry was awarded the first "Distinguished Service to High School Athletics Award" by the Wisconsin Athletic Directors Association. He received the "Red Smith Award" in 1985. He is a recipient of the "Wildcat Service Award" from Green Bay West.

Henry was elected to the Green Bay School Board in 1978 and he has been President since 1981. He is Vice President of the Northeastern Wisconsin Technical College Board. He has been a member of the Green Bay Water Commission since 1972.

Henry's contributions to the community cannot be put in measured terms. The thousands of actions, words, and deeds he has done with his life, have affected untold hundreds of lives. His philosophy and his way of living have changed the course of life for many young boys and girls, helping them become better persons and contributors to their community.