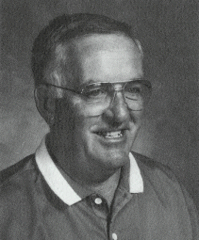 Verne graduated from Mauston High School in 1948. He earned 15 varsity awards in football, basketball, baseball, boxing and track. He enrolled at UW-Platteville in 1948 where he played football.

In 1949 he enlisted in the Navy. After his discharge in 1951, he transferred to UW-La Crosse where he played football for two years. He graduated in 1954 with a degree in physical education and health.

Verne moved to Platteville in 1957 to teach physical education, coach football, basketball and track. While at Platteville he had a record of 52-18-3 in football. His team was undefeated in 1964, and ranked fourth in the state. He was an assistant in basketball while Platteville went 76-3 over a four-year period.

In 1976 Verne left teaching to enter private business for 13 years. During that time he was an assistant coach at UW-Platteville where he had an opportunity to work with his twin brother Vernon (a long-time defensive coordinator at UW-Platteville) on a number of successful football teams.

In 1979 Verne returned to teaching at Southwestern High School at Hazel Green and was coaching football until health problems and a subsequent heart attack forced his retirement in 1988.

He was a member of the South coaching staff in the 1985 Shrine Football Game.