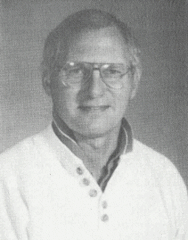 Bob was inducted into the Simpson College Hall of Fame in 1980. While in college the basketball and track teams participated in the NAIA National Championships.

After college Bob attended the University of Colorado on a graduate assistantship where he helped with the 1962 Orange Bowl Championship Colorado Football Team.

In 1962 Bob started his coaching career as the head track coach at Shawano High School where the team finished 2nd in the conference. In 1963 he was the line coach for Gil Krueger at Stoughton High School where the team was 9-0 and 3rd in the state. He was also the head track coach at Stoughton. In 1964, Bob started teaching and coaching in Mosinee and has been there ever since.

At Mosinee Bob was the Athletic Director for over 25 years. He coached football for 22 years. Bob's football record is 182 wins and 29 losses at Mosinee. His teams had a 38 game winning streak from 1969-1974.

In Mosinee, Bob has been on the St. John's Lutheran Church Council and he is a Board of Directors Member with Kiwanis. Bob has refereed football and basketball for over 30 years. He has done many WIAA and WISA State Championships in basketball. In 1981 Bob was selected the Mosinee Citizen of the Year.