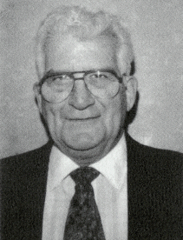 His record was 59 wins, 37 losses, and three conference championships.

Cuch, as he is called by his friends, was an outstanding athlete at Milwaukee Lincoln High School where he lettered three years in football, four years in track and two years in basketball. He was selected to the All City Football Team and ran twice in the state track finals in the 880 yard run. He played football at Marquette University and at UW-Milwaukee. He was selected to the All Conference Team and was Captain of the team at UWM.

He also played football in the Army and was selected as All Conference and captain of his team.

Cuch started his teaching and coaching career at Brown Deer High School. He was a social studies teacher and later became the Director of Guidance. He coached football, track, and basketball. He was a head track coach and became the head football coach in 1965. In track he produced many state track champions and in football his teams won conference championships in 1965 and 1967.

In 1972, he was appointed Assistant Principal at Wauwatosa West High School where he held that

position for five years. In 1977 he was appointed Principal of the Plank Road School in Wauwatosa and was there until he retired in 1990. In 1979, he took over as Head Coach at Wauwatosa West and after a few years, turned the program around. His teams won conference championships in 1982, 1983 and 1984.

His teams did not lose a conference game in those three years. His 1982 team was a runner-up to the Class B State Champions. His 1983 team was semi-finalist and his 1984 team was quarter finalist in the state football championships. In 1985, he was selected as an assistant coach of the South Shrine All-Star Football Team and selected as Conference Coach of the Year two times.