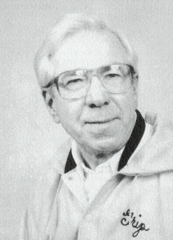 Ray graduated from Marshfield High School in 1941. In high school he participated in football, basketball and lettered in boxing.

Ray was a member of the armed forces during World War II, serving in the U.S. Navy from 1943 to 1946. While in the Navy he had an opportunity to do some more boxing.

After the service Ray enrolled at the University of Wisconsin-La Crosse. At La Crosse he participated in football and lettered in baseball.

After college Ray coached one year as an assistant at Marshfield Columbus. In 1951 he accepted a position as head football coach at Withee High School where his teams won two conference championships in three years. In 1953 he was selected Conference Coach of the Year. While at Withee Ray also coached basketball, baseball and volleyball. In 1954 Ray moved on to Thorp High School where his football teams won two conference championships and he was selected Coach of the Year in 1957. He also coached baseball and basketball at Thorp.

In 1959 Ray accepted the head football job at McDonell Central High School in Chippewa Falls where he coached for nine years. In that span his teams won three conference championships and in 1960 and 1967 he was selected Coach of the Year. At McDonell, Ray was also head basketball coach, head baseball coach, head track coach and head golf coach. In 1969 he became head football coach at Dominican High School in Whitefish Bay and held that position for five years. He was that school's athletic director and baseball coach from 1973 to 1976.

In 1976 Ray left teaching and coaching and worked in the business force for four years.

He returned to teaching and coaching in 1980 and in 1981 he became head football coach at Nicolet High School and was in that position for six years. Ray had 116 wins in 27 years as head football coach in five high schools. As a baseball coach he won 350 games and lost only 85. He served as athletic director at Dominican for five years.

He was president of the Board of Athletic Directors of Milwaukee Metro Conference and a staff member of Northwoods Football Camp in Eagle River for five years. He was selected the Knight of the Year in 1987 by the North Shore Knights of Columbus in Whitefish Bay. He is a charter member of the Nicolet Foundation. In 1989 Ray was elected Alderman of the 1st District in the City of Glendale. He was appointed Assistant State Director for Southeastern Wisconsin of the American Association of Retired People (AARP) in 1990.

Ray retired from teaching and coaching in 1989.