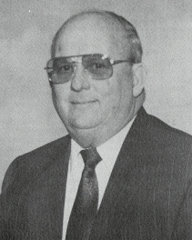 Russ graduated from Galesville High School in 1948. In high school Russ lettered in football, basketball and baseball. He attended college at Winona State University where he received a Degree in Education in 1957.

In 1969 he received a Masters in Counseling from Winona. Russ started coaching at Holmen High School in 1958 where his football team in the school's first year of competition compiled a 4-0-1 record. In 1959 he went to Tomah where he assisted in football and the team won a conference championship. In 1960 Russ moved to Markesan where he taught and coached for six years. In 1964 his Markesan football team was undefeated.

In 1966 Russ returned to his alma mater to teach and coach. At Gale-Ettrick he has compiled remarkable records in four major sports. In football his teams had a 41 game winning streak from 1968 thru 1972. They were ranked No.1 in small schools in the state polls in 1969 and 1970. Russ was the La Crosse Tribune Coulee Region Football Coach of the Year in 1970.

Russ has served as a representative for District 3 on the Executive Committee for the Wisconsin Federation of High School Coaches Associations.

In June of 1990, Russ was inducted into the Wisconsin Basketball Coaches Association Hall of Fame.

Russ has been retired since June of 1989.