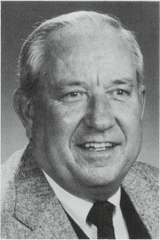 In high school Coach Rundle lettered in football, basketball, track and baseball. He was captain and MVP in all sports and was selected to the Shrine football game in 1952.

Coach Rundle signed a professional baseball contract with the Milwaukee Braves in 1954, and coached semi-pro football and baseball teams. He coached football at Monona Grove High School from 1956-1989; he was head coach from 1962-89, and had an overall record of 165-50-3; 15 conference champions and two state championships; four undefeated seasons; state golf championship in 1987; one of only a couple of coaches in Wisconsin athletic history to win state championships in more than one sport.

Coach Rundle had one of the highest winning percentages in the United States, losing only 30 football games in 25 years. During that period of 25 years his teams never finished below 1st or 2nd place.

"It is an honor and a privilege to serve the greatest profession on earth. My sincere thanks to the WFCA for allowing me to serve in these capacities."