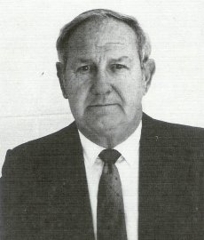 Bob graduated from P.J. Jacobs High School in 1950.  In high school he was outstanding in football, basketball, baseball, and track.

After high school,Bob went on to UW-Stevens Point where he continued to excel in football and basketball.  In his sophomore year he was all-conference in both sports, along with being selected most valuable in basketball.

Bob entered the Army in 1953 and served two years at Fort Benning, Georgia. He played two years of Army football.

After the service, Bob returned to UW-Stevens Point where he again was an all-conference performer in football.  He was selected captain of the football and basketball teams in 1956 and 1957.

Bob's first coaching job was at Westfield High School in 1959.  He coached for three years at Westfield and compiled a 9-9-2 record.  In 1962 he moved to Waterloo where his two year record was 12 wins and 5 losses.

In 1964 Bob moved on to Pardeeville where he coached for twenty years, compiling a 124-47-2 record.  In that span his teams won five championships.  Pardeeville had the best Class C won-loss record in the state compiled by the W.I.A.A

During his coaching career, Bob was also head coach in basketball, wrestling, track, baseball, and volleyball.

In 1979 he was inducted into the UW-Stevens Point Hall of Fame. Bob is a member of the Wisconsin High School Football Coaches Association.