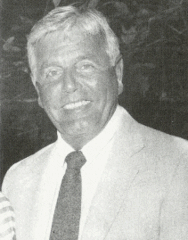 John graduated from Janesville High School in 1951. In high school he was an outstanding athlete, lettering in football, basketball, golf and baseball. He was captain of the football team in his senior year, and a member of the state championship golf team. At UW - LaCrosse, John earned major letters in football, baseball and golf. He was also a member of the varsity basketball team.

He started his coaching career at Florence High School in 1958. He moved to Ladysmith in 1963, Monroe in 1968 and from 1974 to 1988 he coached at Homestead High School. John's teams won four conference championships. He was named Conference Coach of the Year four times. In 1988 he was selected as District Coach of the Year. He was a head high school football coach for 31 years and served one year as the head coach of the Milwaukee Express Semi-Pro football team in 1990. John was head coach of the South All-Stars in the 1977 Shrine Game.

He was active as a semi-pro baseball player and in fast-pitch softball. He has worked football camps for 20 years. He is a charter member of the Wisconsin High School Football Coaches Association, serving as Southern Vice-President for five years. He chaired the committee, which originated the Wisconsin High School All-Star Shrine Game. He also designed and originated the ring program for state championship coaches.