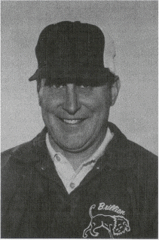 AI is the son of Mrs. Adeline Coenen and the late Ernest Coenen. He graduated from Appleton High School in 1952. In high school he lettered in football, basketball and track. He was also a ski jumper and a Legion baseball player. At UW-Oshkosh AI played football for two years and golf for four years.

AI started his coaching career at Brillion High School in 1960. He coached football at Brillion for 29 years, 25 as head coach. In that span his teams won eight conference championships and were in the play-offs three times. As an assistant in 1984, Brillion won the Division 4 State Championship. Al also coached wrestling for four years, winning one conference championship and coaching an individual state champion wrestler in 1964. He coached track for five years, was head baseball coach for two years and frosh basketball coach for two years. He was the Athletic Director at Brillion for ten years and the High School Principal for three years.

Al's first wife, Joan, died in 1971. They had three children - Kathleen, Michael and Paul. He then married Ellen, a widow who had two children - James and Julianne.

Al feels his induction into the WHSFCA Hall of Fame is really a team award. His teams viewed "team unity" as the most important ingredient. Thus, his team's players and parents, his entire coaching and support staffs, as well as his team's fans in the community, share equally in this award.