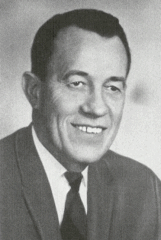 Roy graduated from Thorp High School. After high school he worked at Kohler Company from September 1928 until June 1929, when he resigned to attend college. He attended Wisconsin State University - LaCrosse from 1929 to 1933 and was graduated with a Bachelor of Science degree in physical education and science. In 1933 and 1934 he taught physical education at the Marshfield, Wisconsin Vocational School.

Roy joined the faculty of the Kohler Public Schools in 1934 and served there for the next 21 years as athletic director, head football coach, head basketball coach, and as teacher of mathematics, biology and social studies. During his coaching tenure, his teams achieved a remarkable victory record, winning ten championships. In a 14-year period, for example, Roy's football teams won 87 games, lost only 12, and tied two - all against schools substantially larger than Kohler.

In basketball he won seven championships and finished second four other times in 19 seasons. His overall record shows 285 wins and 132 losses. Over a 15-year period he never had a losing season. His teams won district championships 12 times and the 1950 team made it to the Madison finals while the state tournament was still a one-class event involving schools of all sizes.

Roy also assisted longtime coaching friend, Glen Funk, in track, helping produce numerous state class Championships. In 1976 the athletic field was named the Ebben Field in memory of the Roy brothers, Leo and Roy, who both taught and coached at Kohler.