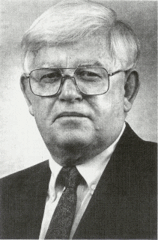 Jim Healy has been more than a friend to high school football. He has contributed above and beyond. He has given that much needed support so necessary to the survival of high school athletics.

After the war he attended Ohio State University where he became acquainted with Woody Hayes and was instrumental in getting Woody as our speaker for our charter Hall of Fame in 1980. Jim has been a benefactor to the Hall of Fame from the beginning. All the old Hall of Fame plaques have been redesigned for the new display area, and again, Jim has provided that service. All the Shrine Game plaques for both the North and South have been provided by Jim Healy from the beginning and will continue to be as long as the Healy family owns the business. He has been a generous benefactor to the Wisconsin Athletic Director's Association.

In 1981, Jim received their Distinguished Service Award and in 1982 he was awarded honorary membership into the Association. This award was presented in Anaheim, California at the National Athletic Directors Convention. Jim also received the 1982 Iowa Athletic Director's Award for contributions made to Iowa athletics. His company also provides all the Athletic Directors President's plaques on display in Stevens Point.

Jim is also on the Board of Directors for the Lombardi Golf Classic, which has donated countless sums of money to the Cancer Society for research, and the Lombardi Cancer Clinic at St. Luke's Hospital. Jim's generous deeds and faith in high school athletics and love for young people are difficult to put into measured terms. He has always been there for us! His philosophy and way of life have provided those extras for boys and girls. He is truly special, and deserving of this recognition.