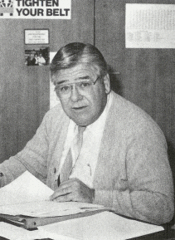 Erv graduated from Monticello High School in 1941. While in high school he lettered in basketball, baseball and boxing. At the University of Wisconsin Erv played football.

His college career was interrupted by World War II. He served in the 78th Army Division in the European Theatre of Operations for three years. He was a recipient of the Purple Heart, Bronze Star and the Combat Infantry Badge.

After the war, Erv returned to Madison where he earned his degree in 1948. His first coaching job was at Sevastopol High School, where his 1948 team went undefeated. In 1951 he moved to Adams-Friendship. In 1953 Erv went on to Oregon High School where he compiled a 66-22-6 record in twelve years. His 1961 team was perfect with an 8-0 record. Besides football, Erv coached basketball from 1948 to 1959 and baseball from 1948 to 1953. His 1948 baseball team won the conference and district championship.

Erv continued to play football for the semi-pro Sturgeon Bay Athletics from 1948 to 1950 and the Wausau Muskies from 1951 to 1953. Erv was honored in 1961 as the first Madison Suburban Conference Coach of the Year. He earned this honor again in 1964. Erv served as Athletic Director at Oregon for 25 years. He was a member of the Coaches Association and the Wisconsin Athletic Directors Association. He is active in the Oregon Lion's Club.