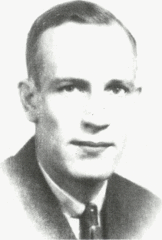 His record was 90 wins, 45 losses, 5 ties, and five conference championships.

Jim graduated from Tomah High School where he starred in football, basketball and track. He was an all-state basketball player and the leading scorer in the state tournament.

At Carroll College Jim lettered in football, basketball and track for three years. He was the first nine-letter winner at Carroll. He was the leading basketball scorer in State College Conference for two years. He was voted the outstanding athlete in 1936. After college, Jim played with the Oshkosh all-star professional basketball team for one year. He began teaching and coaching at Cambridge in the fall of 1938.

He moved to Rice Lake in 1943. That same year he was inducted into the Army. He served in the Pacific War Theatre and also played all-star basketball in California and Texas. He was discharged from the Army in 1946.

He returned to Cambridge as administrator and coach. His football teams at Cambridge won five league championships and his basketball teams, over a span of 12 years, won 136 games and lost 70 while winning three conference and district championships. Jim also coached baseball, track and boxing.

In 1967 Jim moved to Random lake as School Administrator. He retired from Random lake in 1976. In 1971 Jim became a member of the Association of School District Administrators Quarter Century Club. In 1974 he was inducted into the Carroll College Hall of Fame. On August 25, 1991, a new Cambridge Gym was dedicated and named the James B. Knoblauch Athletic Complex in his honor.

Jim was active in the Lion's Club, a director of the Cambridge Foundation, lake Ripley Country Club, a member of WASA, WASDA, WEA, and NEA. He also served as a member of the WIAA Board of Control.