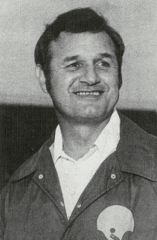 He began his coaching career at Grantsburg in 1954 as head basketball coach and his first head coaching position in football was at Stoughton where he won 35 of 36 conference games and posted a record of 52-11-1 between 1956 and 1964.

Gil then stepped up to the collegiate ranks as an assistant coach at North Central College in Illinois from 1964 through 1966, when he was given his first college head coaching assignment at Macalester College. In 1969 Gil went on to UW-Platteville where he compiled a record of 41-7-1, winning three Wisconsin State University Championships. In 1970 his team earned a berth in the NAIA play-offs. At Northern Michigan University, Gil's teams had a 31-15-0 record. They won the National Championship in 1975 with a 13-1 record. That same year he was name College Coach of the Year. In 1978 Gil took over the reins at New Mexico State. He continued his winning ways by capturing the Missouri Valley Conference Championship in his first year. For that feat he was again selected as Coach of the Year.

In 1983 Gil was an assistant coach with the New Jersey Generals of the USFL Professional Football League. In 1984 he went to UW-Superior where he coached for four years. He retired from coaching after the 1987 season. In 32 years of coaching Gil's teams have won ten championships.

Gil's community involvement includes being president of the Jaycees and an active Lion's Club member.