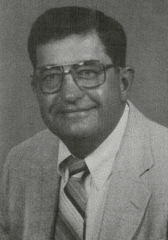 Fred graduated from Lake Mills High School in 1950 where he lettered in football and baseball.

After his discharge from service, Fred attended Santa Anna Junior College where he played football for one year. From 1956 to 1960 he attend the University of Wisconsin at Madison and earned his degree in physical education.

Fred started his coaching career at Fall River in 1960. He moved on to Poynette in 1962, Lakeland High School in 1964 and then spent twenty years at Wisconsin Dells. In 1986 he moved to Rhinelander. He retired from teaching and coaching in 1991.

Fred's teams won nine conference championships and were in the state play-offs three times. He was District Coach of the Year in 1976, 1984 and 1989. In 1976 Fred was Wisconsin Dell's "Man of the Year." Besides football, Fred coached basketball, wrestling and track. He was advisor to the letter-winners club, the weightlifting club and the Fellowship of Christian Athletes Huddle. He worked football camps at UW-LaCrosse and UW-Whitewater. He has spoken at several football clinics and every year at various service clubs.

In 1979 Fred was an assistant coach for the south in the Shrine All-Star Game. He was a district representative for the Wisconsin High School Football Coaches Association from 1974 to 1979, served as president from 1979 to 1981 and past president from 1981 to 1985. He was chairman of the all-state football selection committee and banquet from 1976 to 1984. Fred was a member of the WEA, NEA and W ADA. He is a member of the First United Methodist Church in Rhinelander.

Fred's life and approach to coaching were influenced by many people. Fred recognizes his mom and dad for their love, competitive spirit and work ethic; Mary, his wife, for humility, loyalty, encouragement and a shoulder to cry on; Dan, Sarah and Laura, their children, for understanding the demands of coaching.

The many assistant coaches, especially the Wisconsin Dells and Rhinelander coaching staffs were the reason for any success. Last, for the young men that participated, Fred hopes that his philosophy, "You should be a better human being for having participated," was achieved.