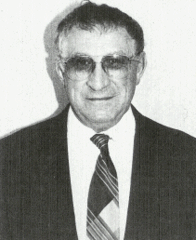 His record was 51 wins, 37 losses, and 5 ties. Four conference championships with one undefeated season.

Joe graduated from LL Wright High School, Ironwood, Michigan in 1941. While in high school he lettered in track and baseball.

In 1943 Joe was drafted into military service. He served 26 months in India and Burma.

After the war, Joe enrolled at OW-Superior where he lettered in football. He earned his BS degree in 1952 and accepted a teaching and coaching position at New Auburn High School. At New Auburn, Joe coached football, basketball and baseball.

In the mid 60's, New Auburn's football fortunes were documented in the WIAA Bulletin as being in the top five in wins-losses during the past decade. Coaches from around the country sought Joe's innovative, explosive football ideas. In 1960 he was one of three football coaches to speak at a coaches clinic - the other two coaches being Dan Devine and Vince Lombardi.

In 1966 Joe moved to Bloomer High School where he served as Guidance Counselor for one year and High School Principal until his retirement in 1985. While at Bloomer, Joe coached the girls softball team for three years. He was a WIAA basketball, football and baseball official for many years.

He served on the WIAA Insurance Advisory Committee, and as president of the Lakeland Conference. He was president and secretary of the Heart O'North Conference and Heart O'North Schoolmasters and served on the Retired Principal's Commission. He was chairman of the Bloomer United Way annual drive and has been an active member of the VFW and American Legion for 24 years.