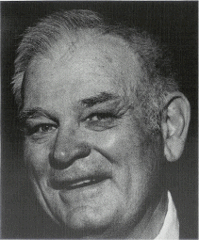 After high school he started his coaching career at the parochial grade school level, coaching for six years and compiling a 48-1-1 record. After college, Bill was in the military service from 1942-45. From 1946-50 he was an assistant coach at Green Bay Central High School.

In retirement Bill coached as an assistant at St. Norbert's. Overall, his teams prior to retirement have won 249 games. During his career Bill served as athletic director for 27 years. He coached basketball for twelve years, winning four championships.

In 1990, Bill was elected to the Green Bay Municipal School District Board of Education. He is seeking a second term.

Bill is a tireless worker and a tremendous influence on the game of football in Wisconsin. We salute you with this Gold Service Award.

"52 Years of Coaching Football in Wisconsin"