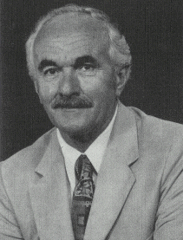 Hal graduated from Milwaukee Washington High School where he lettered in football, basketball and track. At the University of Wisconsin Hal played football and was on the track and golf teams.

After graduation from college he started his coaching career at Markesan High School where he started 8-man football and coached basketball. Hal moved to Lake Mills in 1942, where his football team won a championship.

After military service, Hal took a teaching position at the University of Wisconsin where he served on the physical education staff from 1946 to 1962. Fifty percent of that assignment was to serve as athletic director and coach at Wisconsin High School. During that period his football teams won 74 games, lost 49 and tied 5, winning two conference championships. This record is enviable considering that Wisconsin High was only half the size of the next smallest school in the conference.

Probably his biggest contribution was to the countless young men who he supervised and counseled as beginning teachers and coaches. Because of his influence many of these men have gone on to successful and rewarding careers.

Wally graduated from Milwaukee Washington High School where he was captain of the team his senior year under Coach Lisle Blackbourn. Wally then went to the University of Wisconsin and played on the freshmen team before going to Michigan with the Marine Corps reserves. At Michigan he played on a championship team.

Wally was commissioned a Second Lieutenant and served for three years in Okinawa during World War II.

After the war he returned to Madison where he played football from 1946-48. He was captain of the team in 1948, and also played in the Blue-Gray post-season game.

In 1949, he was drafted by the Chicago Bears and Coach George Halas. He was traded to the Green Bay Packers in 1950 and played for two years under coach Gene Ronzani.

Wally's football coaching career started at Berlin High School in 1952. That year he took a team that hadn't won a game in three years and coached it to four victories. He also coached basketball at Berlin. He then moved to Milwaukee Rufus King. At King he won city championships in 1955, 1956 and 1958. Wally's teams were undefeated in state play for 15 straight games between 1957 and 1959.

Over the years Wally has been active in both professional and volunteer organizations. He was Vice President of the Milwaukee Coach's Association, member of the Wisconsin Association of Health, Physical Education and Recreation, Wisconsin Coaches Association and Phi Epsilon Kappa. In 1976, Wally received a teaching award from the Wisconsin Association of Health, Physical Education and Recreation. He was also a member of the AAHPER and the American Football Coaches Association. Wally has been an American Red Cross volunteer for over 35 years and is a first aid and CPR instructor. Hundreds of Wally's players and students are now physical education teachers and coaches in our state and across the country.