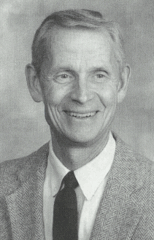 John graduated from Madison East High School where he participated in football, basketball and track. He then went on to the University of Wisconsin where he was a member of the Crew (rowing) Team. John earned his Master's Degree from UW-Madison in 1964 and his PhD in 1979.

In 1959, he started his coaching career at Madison Central High School where his freshmen football teams won championships four years in a row: 1961 - 1964. At Central, John was also assistant basketball and track coach. He moved to Madison Memorial in 1967 and was Head Football Coach until 1974. During that span his teams won three Big 8 Championships: 1970, 1971 and 1973.

At Memorial John was also assistant track coach on state championship track teams in 1973 and 1974. He served as Assistant Principal at Memorial from 1974 until 1980. From 1980 until 1987, John taught in the Physical Education Department at the University of Wisconsin-Madison. In that position he helped prepare and influence a number of young people for teaching and coaching. In 1987, he accepted a position as Coordinator of Health and Physical Education in the Madison Schools and in 1988 he became Athletic Supervisor of Interscholastic Sports in Madison.

He is a member of the U.S. Coast Guard Reserve and was mobilized for Operation Desert Shield/Desert Storm.

John has been and still is an influence and outstanding contributor to the game of football in Wisconsin.