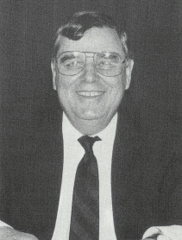 Marv graduated from South Beloit High School where he lettered in football, basketball, baseball and track. At Milton College, Marv played basketball and baseball. He started his coaching career at Juda High School in 1956. He moved on to Orfordville in 1958, where his teams won two State Line Conference Championships.

He is a charter member of the Wisconsin High School Football Coaches Association. He served for many years as district representative. In 1980, Marv was selected to coach the North Squad in the Shrine AlI-Star Football Game. His team was victorious 16-9.